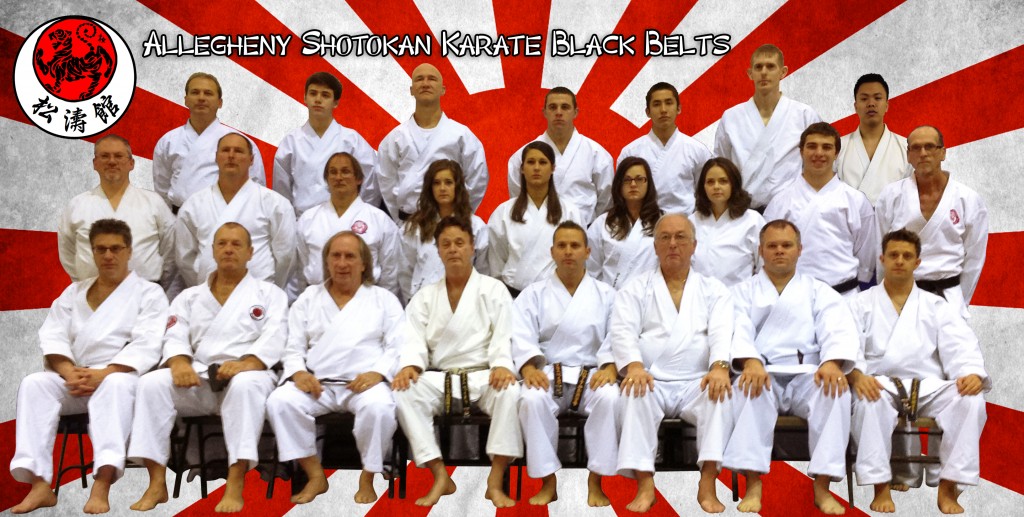 On December 16th 2012, Allegheny Shotokan Karate honored North Huntingdon resident Dave Jones with the rank of Black Belt. Jones, who
began his martial arts training circa 1975, quickly made a name for himself as a full contact fighter, honored and inducted in the Heinz History Museum
in 2011 as one of the first mixed martial arts fighters in American history.

Despite his success as a champion fighter, an extremely rare and chronic
blood disorder called Porphyria cutanea tarda (PCT) had kept him from
receiving his black belt for many years. His dedication and perseverance
was finally rewarded in front of his peers at the 2012 Laurel State Karate
Championships, held in Pittsburgh, PA. The 37th annual martial arts event is
one of the oldest running marital arts tournaments in Pennsylvania area and
sanctioned by the Pennsylvania Karate Rating Association (PKRA). Jones
received a standing ovation during the ceremony.

Since 1969, The Allegheny Shotokan Karate School has produced some of
the most celebrated martial artists in the history of Pittsburgh Karate and Pennsylvania; recognized as the most successful national and international sport karate school in the Pittsburgh region by the National Black Belt League. NorthHuntingdon Martial Artist Sensei Bill Viola Sr. founded the organization
nearly forty five years ago and since taught tens of thousands students over
his career.

Viola explains, “Even though so many students have trained with me over
the years, its only an elite group that earn the rank of black belt from
Allegheny Shotokan. I believe in quality over quantity, when it comes to
wearing that particular belt. In the case of Dave Jones, he has been with
the school for over 30 years, and fought through adversity. He deserves it.”

Find us on Google+
Google