By Jen Cardone | The Duquesne Duke 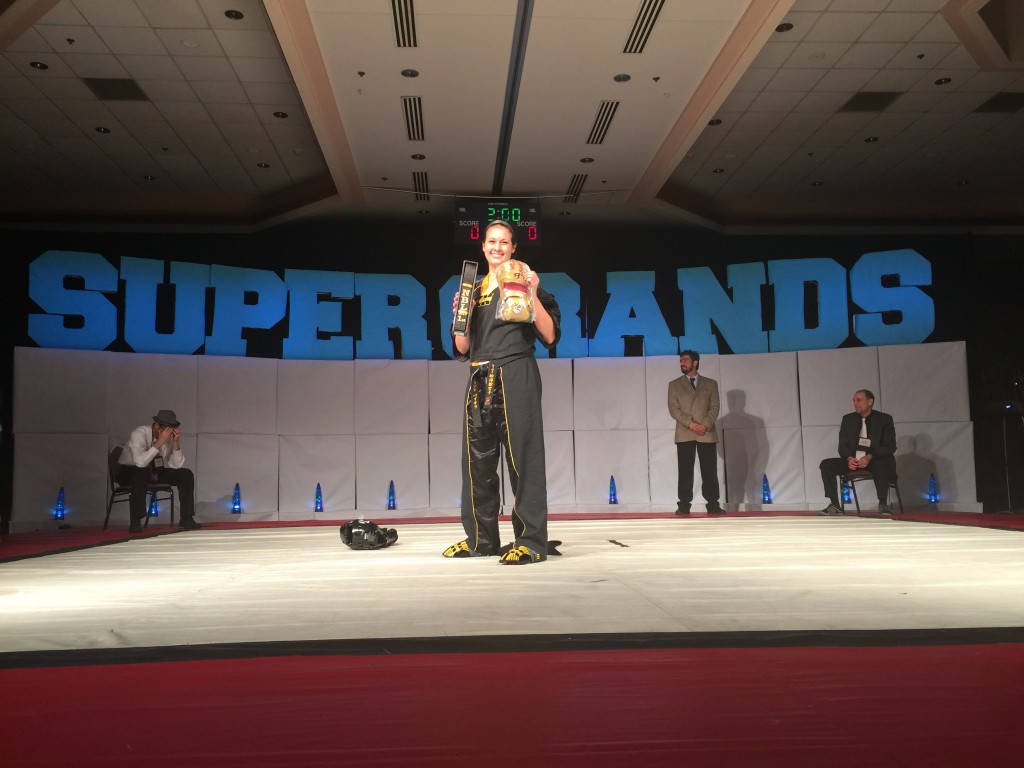 Competitors must qualify regionally and nationally to be seeded in the worldwide event. This year’s conference was held in Buffalo, New York from Dec. 26 to 31.

Viola won Women’s Middle Weight sparring after defeating Ashlee Grant from California. Viola was also awarded with a team title after working with Willie Hicks from Texas and Luis Jimenez from Mexico.

She chose Duquesne’s law school because of her part time job at Eckert Seamans and close proximity to her family and her father’s martial arts school. She said it’s a nice change from her undergraduate experience at Youngstown State University in Ohio.

Viola said she does the best she can with balancing her school work, job and the martial arts.

“At this point my school life comes first so I just try to get all of my academic obligations complete and then I worry about work and martial arts,” she said.

Ali was not the only Viola to be internationally recognized at the Super Grands. Her four-year-old niece, Gabby, was the youngest competitor this year.

The martial arts are a Viola family tradition. Bill Viola Sr., Ali’s father, opened the Allegheny Shotokan Karate School in 1969. She and her four siblings all have their black belts.

“I saw my older siblings doing it, so I got involved,” Ali Viola said.

Ali has been part of her father’s business since before she could walk and an instructor since age 12. She said karate has been a huge influence in her life.

“It’s like a team sport but still individual,” Viola said. “You don’t accomplish anything without your teammates standing behind you.”

Her brother, Bill Viola Jr. said the determination and work ethic she gained from growing up in a family of martial artists has shaped her overall outlook on life.

“That focus she learned from karate has helped her succeed in school, and I know it will continue to pave the way for her career in law,” he said. “She is not only a talented competitor, but I have seen her grow as a coach and mentor to the next generation like my daughter Gabby.”

Right now, Ali is working on her third-degree black belt. She said it took her 10 years to get the first degree.

“It’s just a matter of knowing the basic techniques,” she said.

Bill Viola Sr. said his daughter has been competitive from the beginning of her karate career.

“Through her study of the martial arts, Ali has developed confidence, character and integrity,” he said. “At a very young age, Ali decided that she would be the best that she could be in her competitive division and devoted countless hours in the dojo.”

Bill Viola Sr. said the skills his daughter has developed carry across all aspects of her life.

“Over the years, I have recognized that same determination in all other areas of her life,” he said. “Ali’s discipline and motivation allows her to achieve the high goals she sets for herself in her life. As a father and her coach, I couldn’t be more proud.”

Ali Viola said karate has given her the self-confidence and self-discipline skills she maintains today.

“It has provided me with the tenacity to achieve the goals I set for myself,” she said.

Ali Viola said she would never consider marital arts as a professional career because it is something she enjoys doing.

“If it were to become professional I think it would take a lot of the fun and enjoyment out of it for me,” she said. “My professional ambitions center around becoming an attorney.”