Martial Arts are a family affair 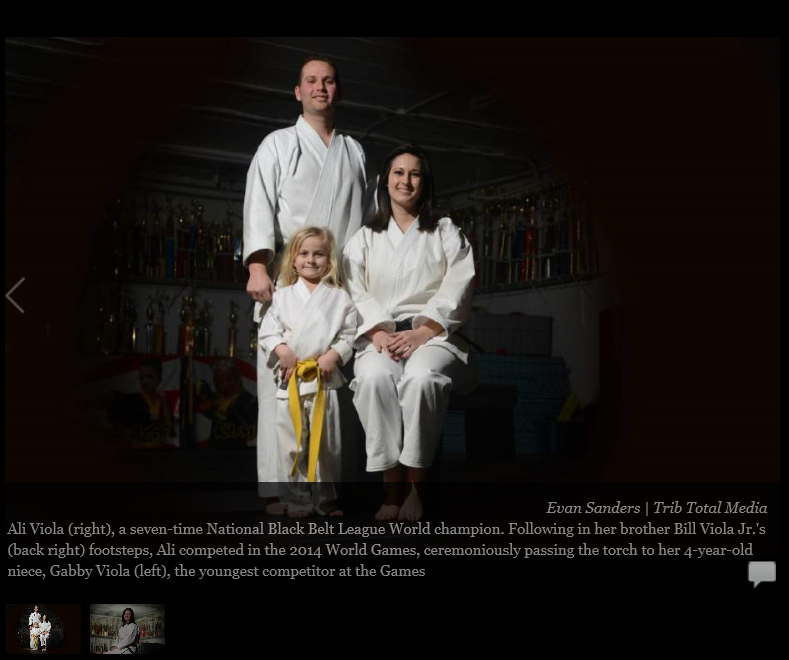 Growing up in the world of martial arts and competing since she was 3, Ali Viola believes the self-confidence and discipline she has gained carries over into her pursuit of a professional career.Viola, 22, is a Duquesne University law student and seven-time national Black Belt League world champion.She works for a Pittsburgh law firm and is an assistant coach for Team Kumite, the all-star travel team founded by her brother, Bill Viola Jr., 37.

In December, she competed in the 2014 World Games, known as the “Super Grands.” She added two world titles to her resume: one for women’s middleweight sparring and one team title.

All five have earned black belts and remain involved in the sport.

“Everybody does it. It’s in the DNA,” her brother said.

Viola Jr. is the head coach and instructor at the family-run school.

“I was here before I could walk. This was legitimately my day care,” he said.

Now, the third generation is growing up at the school.

Several Viola grandchildren study martial arts under the instruction of their grandfather and other adult family members.

“She was the youngest competitor throughout the season,” her father said.

Gabby came in fourth and earned an Amateur International Title. More importantly, she is learning the character-building skills her family tries to pass on through martial arts, her father said.

The school’s motto is “Building Champions in Life.”

Ali Viola said martial arts has given her the confidence to speak before a crowd and to defend herself physically.

“I could get out (of a bad situation) alive,” she said.

“That self-esteem, self-confident boost, lessens the likelihood of being prey. I want my daughter to have that,” Viola said.

The winner of multiple international karate championships, Bill Viola Jr. moved into producing and coaching full-time after a career-ending automobile accident in 1999.

“It was a blessing in disguise,” he said.

A book Viola wrote, “Godfathers of MMA,” to be published in a few months, details the journey of his father, credited as co-creator of the sport of mixed martial arts, and his business partner, Frank Caliguri.

Working with his siblings and instructing classes has brought him great satisfaction, he said.

“Gabby is my ninja assistant,” he said.

Gabby, a tiny blonde who has earned a yellow belt, demonstrated her favorite move, a blocking hand motion called shuto.

Bowing from the waist, she showed how her karate classmates greet each other with the Japanese word for friends — “tomodachi.”

Viola believes the discipline needed to stick with martial arts at a young age can carry through from academic success to standing up for oneself or others who are being bullied.

“I see (students) picking people up instead of putting them down. They work together,” he said.

Champions in the making are all about attitude, the siblings believe.

“A student has to want it. He has to be focused and driven. You can’t teach that,” Ali Viola said.

“You can see it in a kid’s eyes. You have it or you don’t,” her brother said.

Ali Viola received a diamond ring and a belt in championship winnings.

But she said pride — not a prize — is her strongest motivator.

Future competitions will depend on her class and work schedule.

“At this point in my life, school comes first,” she said.

Mary Pickels is a staff writer for Trib Total Media. She can be reached at 724-836-5401 or mpickels@tribweb.com.